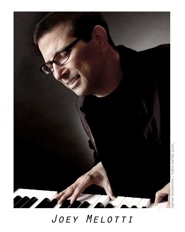 With the support of his loving family…

Joey Melotti began his musical journey at the age of 5, starting with the accordion and cutting his first piece of vinyl at 8 years of age.

He began touring in 1976 with the late Vickie Sue Robinson, famous for her hit single, “Turn the Beat Around”.  He produced two of his own albums, “The Joe Melotti Quartet: Live at the Foundry Café” and “Take Another Look”.

Joey’s musical director credits include Barry Manilow, Eartha Kitt,  Michael Bolton, Liza Minnelli and Julio Iglesias, accompanying them on their world tours.  He has also been conductor and musical director for David Gest on numerous productions, and has collaborated with outstanding artists like Michael McDonald, Luther Vandross, and Usher, to name but a few.

Additional highlights include serving as arranger, conductor, and co-musical director with Greg Phillinganes for the CBS TV Special,  “Michael Jackson: The Solo Years 30th Anniversary Celebration”, arranger and keyboardist on Liza Minnelli’s CD, “Liza’s Back”, and keyboards on Barry Manilow’s #1 release “The Greatest Songs of the Fifties”.  Presently he enjoys being a part of the vibrant music scene in Las Vegas completing a 5 year engagement at the Las Vegas Hilton and a 2 year engagement at Paris Hotel with Barry Manilow.

His last two solo CD releases  “Moving At The Speed Of Love” and “Cleansing” are available for digital download at iTunes and CD Baby.  Joey has also recently produced the soundtrack for best-selling author Stacey Hall for the audio supplement to her book “Chi-To-Be!” Achieving Your Ultimate B-All.  This includes the single “My Chi-To-Be” (also available for digital download).  His new CD, “Celebrate Your LIfe”  will be released shortly.  You can visit his GoFundMe page at: ‪gofundme.com/65uldw‬.

Joey also lends his efforts and talent to numerous charitable organizations including the Michael Bolton Charities, This Close for Cancer Research, and the Liberace Museum.  He endorses Muse Research, Quick-Lok Keyboard Stands, and Studio Projects microphones.  For a complete list of credits, and sound bites of his latest tunes, please visit http://www.myspace.com/joeymelotti.