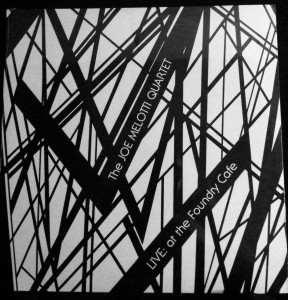 The Joe Melotti Quartet was created in the late 70’s with Arti Dixson, Marion Meadows and Paul Spinner.  The group had an amazing following and packed the Foundry Cafe.  The live record was inspired and funded by Foundry owners Lou Pelligrino and Nick Iovanne.  It was their wish to record a live album from their club and  presented Joey with the task of production front start to finish.   Their dream came true on May 25, 1980.  The  label “Big Hat” was created and the logo was a chef’s hat (Joey’s father Vinny was an amazing cook and head chef at the well respected Graduate Club Association, affiliated with Yale).

The album opens with a fiery version of  the instrumental section of Billy Joel’s “Zanzibar” adapted by the quartet followed by:

Side Two is all originals