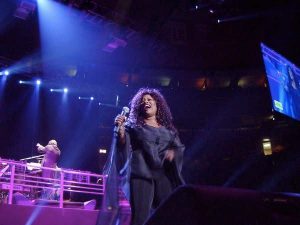 Joey’s musical director credits include Barry Manilow, Eartha Kitt,  Michael Bolton, Liza Minnelli and Julio Iglesias, accompanying them on their world tours.  He has also been conductor and musical director for David Gest on numerous productions, and has collaborated with outstanding artists like Michael McDonald, Luther Vandross, and Usher, to name but a few.
Additional highlights include serving as arranger, conductor, and co-musical director with Greg Phillinganes for the CBS TV Special,  “Michael Jackson: The Solo Years 30th Anniversary Celebration”, arranger and keyboardist on Liza Minnelli’s CD, “Liza’s Back”, and keyboards on Barry Manilow’s #1 release “The Greatest Songs of the Fifties”.  Presently he enjoys being a part of the vibrant music scene in Las Vegas completing a 5 year engagement at the Las Vegas Hilton and a 2 year engagement at Paris Hotel with Barry Manilow.